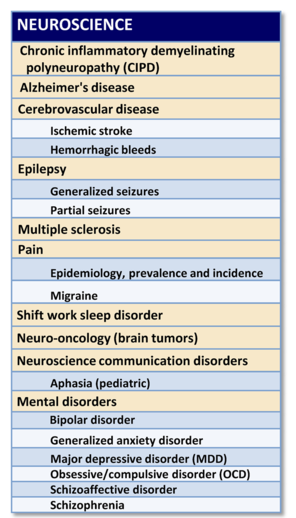 Schizophrenia / bipolar disorder – We conducted a series of large national studies of schizophrenia patients, including treatments received, treatment outcomes, and market potential for a new class of drugs. We conducted the prelaunch qualitative and quantitative research for a new atypical antipsychotic and continued tracking / market strategy evaluation studies of the entire market (ATU and / or patient chart studies) for more than a dozen years, helping our client’s drug become a blockbuster. As part of this research, we also studied a wide range of psychotic disorders including bipolar. More recent research includes a comparative study of atypical antipsychotics.


CNS – Dr. Jack R. Gallagher, Clarity’s principal scientist, is a trained clinical psychologist. He has firsthand experience in evaluating and treating patients with a wide variety of central nervous system conditions, including Parkinson’s, epilepsy, aphasia, and pain disorders such as migraine. He worked with children and adults with epilepsy and patients with Parkinson’s while serving his doctoral internship at the Lynchburg Training School and Hospital in Virginia, the state institution for the neurologically or cognitively impaired.

Seizure disorders – Several of our research projects have been landscape usage studies, to understand the extent to which various treatments were being employed − e.g., monotherapy vs. polytherapy or extended release vs. other modalities to treat various forms of epilepsy. Each of these studies involved the use of advanced analytics to discover the key drivers of the most frequent treatments, while holding other tested factors constant. We have studied modality of treatment (i.e., oral, injection, infusion), partial and complex partial seizures, generalized seizures, absence (petit mal) seizures, myoclonic seizures, and tonic-clonic (grand mal).

We also conducted a patient records based segmented market and forecasting development study for an extended release medication to treat seizure disorders.

Alzheimer’s – Patients have represented important segments in several of our studies, including the one above, in which the need to control hallucinations for patients with senile dementia Alzheimer’s type (SDAT) was the second most frequently cited reason for prescribing a concomitant drug.

MS – Our experience with multiple sclerosis extends back to Dr Gallagher's clinical internship in a Virginia state hospital, where he worked with more than 100 MS patients and adults. Clarity since has studied various MS (and RRMS) treatments, including biologics, steroids, and interferons. In one study, we explored the extent to which MS patients had received GM-CSFs to minimize inflammation.